Only moments have passed since Tulk fired the shots that crippled the stealth launch and the second launch has raced to dock with the Tohre-Chi ship. The boarding party is aware that they’re about to have company (bad company at that!) as well as finally noting that JoJo has wandered off. Mister “Black” of the Unit decides that most of his team will go down a level, then make their way aft in an attempt to flank the approaching hostiles while leaving behind one of their number to continue cutting out computer core; the Bad Omen Crew will need to “hold the line” and AJ quickly hashes out a rough tactical plan. He goes to the ceiling (thanks to the zero-gee environment) where he wedges himself into place while directing Calista to a nicely defensible spot that will also give her great fields of fire. Zennith continue to poke around the CIC, looking for things of interest (to him, anyway) while below-decks, JoJo endeavors to communicate with the now wakening (and very badly damaged/injured) Tohre-Chi. The doctor is somewhat successful in this and then begins patching up the alien’s environment suit with his own suit’s emergency repair kit. Meanwhile, Tulk is able to tell that the people in the first launch are trying to facilitate repairs and draw closer to the Omen, probably in order to attempt a boarding action; he fiddles with the comms and issues a “stand down or I will shoot the shit out of you” order.

On the Tohre-Chi ship, the Hostiles approach, laying down ineffective suppressive fire to cover their advance, which result in AJ and Calista engaging them from distance. AJ opens up with the close-assault weapon he obtained on Lucifer and the APDS slugs rip through one of the boarders’ suit, likely killing him instantly, and Calista lights up another man with her heavy laser pistol, badly wounding him and basically turning him combat ineffective. Facing this unexpectedly heavy return fire, the boarders’ advance completely stalls out and they hunker down under cover to exchange shots that don’t hit much of anything. At the sound of the firefight beginning, JoJo is surprised that the Tohre-Chi reacts and heads toward the firefight; over the comms, the doctor quickly tells everyone not to shoot his new friend and barely gets this across before the alien passes through the Unit who have reached their jump-off point and are about to engage the Hostiles. Still, AJ takes a bead on the Tohre-Chi as it appears due to its proximity to the reactor – he is concerned that the thing is going to try and cause the entire ship to go boom and plans to shoot the “shark” before then. Seeing the wisdom in this, Zennith secures his discovery – a compact, folded up Tohre-Chi gauss rifle – to his suit and draws his own laser pistol to join the “line” while his wife continues to lay down a withering barrage of suppressive fire herself.

Over on the Omen, Tulk hasn’t received word back from the other launch and is now able to see heat signatures exiting it. He neither knows nor cares if they’re just trying to abandon a crippled vessel, and instead re-engages with the Omen’s laser. Most of his shots are misses given the distances involved and his general inexperience with shipboard weapon systems, but enough of them strike home to turn the craft into a floating derelict. He’s also pretty sure that he nails several of the rock-jumpers who were exiting the launch. All in all, its a very bad day for them.

The Tohre-Chi launches itself into the fight, deploying some sort of cybernetic claws, and immediately draws all fire from the hostile boarders. Before things can get completely out of hand, though, the Unit engages … and they are not shooting to wound. In seconds, all hostiles – including JoJo’s new friend – are down and the ship is secure. Now with the computer core cut free, the Unit is ready to bug out although Zennith desperately wants to stay for a while longer. AJ agrees only to let them take some extra time making their way back to the docked launch so Moss can try and secure interesting samples for study. At the launch, Mister Black announces a change to the plan: there is no way for the Omen to outrun the Alliance frigate, USS Bunker Hill, so he and his team will take the functional stealth launch and use it to make good their escape while the Crew surrender to the Hill. The very notion of surrendering at all, especially to legal authorities, causes both Calista and Tulk to get upset, but AJ acknowledges the wisdom in this since he, better than the rest of the Crew, knows what the Hill is capable of and he knows that, technically, DSD, Inc. has done nothing wrong. As captain, he agrees to this on the condition that they allow Zennith to obtain some samples from the launch that Tulk ripped apart with the Omen’s laser. Mister Black is okay with that since they need to blow up that craft anyway and he likely doubts that Moss is going to learn that much from just a couple of pieces. With the key to the escrow account with the rest of their payment (plus a little extra) in hand, the crew examines the undamaged launch & discover it has jury-rigged flight controls that function well enough. AJ takes the controls – he’s always wanted to fly an alien ship, so this is one thing off his bucket list – and takes them to the other launch, now a drifting derelict, where the Crew secures the stealth samples while the Unit plants another explosive. All of the Unit’s gear is relocated to the launch and the two ships part ways with AJ pointing the Omen at the Hill so they can just ‘get it over with.’ Once they’re more than 10K kilometers away from the Tohre-Chi ship, there are several flashes as the charges detonate. 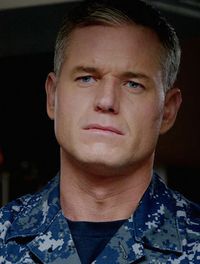 The Hill identifies the Crew’s approach vector and issue a “stand down and prepare to be boarded for inspection” order, something they did not do earlier, and AJ signals compliance on a wide-beam transmission so the entire system could potentially hear it. The two ships dock some hours later and armored marines board where they inform the Crew that the captain would like to speak with them. AJ, being the only ex-military member of the Crew, takes lead and goes into savoir-faire mode in an effort to make up for Calista and Tulk being in uncooperative moods. Once aboard the Hill, the crew are scanned and then secured, with AJ being led away to an interrogation room. He has uncomfortable memories of rooms like this from his time in the TFR following the disappearance of the Normandie and falls back on old habits by running wormhole calculations in his head to defeat any potential psychic scans. Soon after, Commander Savage, the ship’s captain, enters and quickly notes AJ’s distraction. With nothing to hide, AJ tells the pure, unvarnished truth and provides data recordings of their encounters with the Unit to back this up. Before they conclude this interrogation, AJ makes sure that CDR Savage knows that any blowback from this must fall on him (AJ), not the other members of his Crew who were just following the chain-of-command. Savage says he will do what he can but doesn’t promise anything.

Tulk is next and he is more than a little irritated at having to go through this crap at all, so he decides to share his pain by dragging out his story for as long as he can while couching it from a purely administrative and economic point-of-view, which likely makes the interrogation hideously dull. JoJo is next and his utter inability to lie results in him spilling absolutely everything that he knows and then some, which means he’s out very quickly by way of comparison. Calista doesn’t even try to hide her lack of interest in being here since she knows that AJ has all of this recorded. As a result, she’s ‘compliant, but not helpful,’ answering questions in terse sentences that use the bare minimum of words necessary to get the point across. When she leaves, she gets the feeling that Savage doesn’t like her and she doesn’t care. Zennith, who is still annoyed at the (in his opinion) unnecessary destruction of a technological treasure trove, takes the opportunity to rant at CDR Savage about the general stupidity of humans in destroying things they don’t understand. In the course of this, he basically counter-questions Savage who acknowledges that his orders were really unclear and he didn’t even know about the Tohre-Chi ship until just recently. The Bunker Hill’s captain also implies that his orders indicated that Mister Black’s Unit – who he references as Special Operations Group Team Nine – might have been rogue.

With the entire Crew interrogated, Savage advises them that he is releasing them because he does not consider them to be complicit with any wrong-doing. He does not state they are wholly free and clear as the Alliance could potentially still charge them (although Zennith at least hears this as “you’re innocent of all charges”; AJ being former Navy himself recognizes military CYA speak when he hears it), though CDR Savage does not think there is anything they actually could be charged with. He further states that the Bunker Hill will escort them back to Tamborro Station and the Crew return to their boat. They’re going home.